I am a mathematician turned data scientist and am developing new data science methods for complex spatio-temporal problems, with a particular focus on movement research. I work on methods for both human mobility and animal movement. I collaborate with movement ecologists on animal movement and am interested in how data science can help us find out more about why and how animals move and to see the world through their senses, that humans may not possess.

Funded by The Leverhulme Trust

Migratory birds are capable of amazing feats of navigation, yet our understanding of how they do this remains fairly rudimentary. We explore how birds use Earth’s magnetic field for navigation in a novel data science approach to ecology. For this, we will connect bird tracking data from over 60 studies with geomagnetic data from satellites and terrestrial networks, to, for the first time, find out about the actual geomagnetic conditions that the birds experienced during their journeys. These joint data will be explored with data mining and results validated with navigation simulations in real geomagnetic data, collected in robotic drone surveys.

Funded by the Economic and Social Research Council (ESRC)

Funded by The Royal Society.

Analysis of eye movements provides insights into cognitive processes in human brain during tasks such as reading and exploration of digital displays. In human-computer interaction (HCI), eye movements are studied through eye tracking, which produces spatio 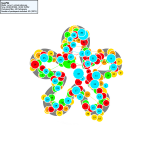 l trajectories of gaze direction on the screen. In HCI, usability of interactive displays is also evaluated through mouse movements. These can be collected accurately, easily, remotely and on a large scale to uncover differences in how users experience a particular display. In absence of costly eye tracking tests, mouse trajectories are used as a proxy for users’ perception of display. In this project we examine potential linkage of eye and mouse movements in visual exploration of a geographic display. We develop new analysis and visualisation methods for trajectory data to support this exploration.

In 2014 I became Scientist in charge at the University of St Andrews of the Marie-Curie International Traning Network (ITN) Geocrowd: Creating Geospatial Knowledge World (2010-2014). This project supported one of my PhD students, Katarzyna Siła-Nowicka.

Funded by COST (European Cooperation in Science and Technology)

Recent developments and ubiquitous use of global positioning devices have revolutionised movement ecology. Scientists are able to collect increasingly larger movement datasets at increasingly smaller spatial and temporal resolutions. These data consist of trajectories in space and time, represented as time series of measured locations for each tagged animal. Methods for analysis and visualisation of such data hav

e been developed for much sparser and smaller datasets obtained through very high frequency (VHF) radio telemetry. They focus on spatial distribution of measurement locations and ignore time and sequentiality of measurements. This project develops alternative geovisualisation methods for spatio-temporal aggregation of trajectories of tagged animals in the context of 3D space-time density. The method was developed to visually portray temporal changes in animal use of space using a volumetric display in a space-time cube.

Funded by ERA-NET on Complexity

Recent technological advances in spatial data collection have caused an explosion of new data volumes and their availability. One of these data types are flow networks, sometimes also called origin-destination (OD) networks which are now being increasingly captured using various forms of sensor technology from bespoke system which track vehicles and passengers to smart phone locations can that can be associated with individual travellers. Examples are transportation networks (e.g. flows of passengers between subway stations), migration/commuting networks and mobile phone communication networks. In the geographic tradition which can be traced back forty years at least, one of the uses for flow networks has been in context of regionalisation: flow information was used to derive regions of functional interaction between origin and destination locations. However, methods for regionalisation from flow data have been forgotten after a start in 1970s, due to the lack of capabilities in computing power. In this work we revive these half-forgotten methods and develop new ones based on old work and network methods from complex networks research in contemporary physics.

Geographically Weighted statistical methods are increasingly popular to understand spatial processes in situations when the data are not modelled well by a universal set of parameters but when there exist regions in the geographic data space where a suitably localised set of parameters provides a better description of the modelled phenomenon. Instead of one global model, such methods produce a different model at each location in geographic space where the local model is based on a geographically weighted subset of data. Because of the phenomenon known in information science as “the curse of dimensionality”, the magnitude of the results from local modelling techniques increases exponentially and can quickly become overwhelming in terms of trying to understand the information conveyed in the results. Exploring these large data sets of results is therefore a problem for a successful interpretation and understanding of the local method. In this project we suggest that this task could be facilitated by geovisual analytics. We look at different GW methods and their spatio-temporal versions, and investigate the challenges such highly dimensional results produce in terms of visualising the results. The task of adequately exploring such large and complex data sets of results emanating from spatio-temporally weighted statistical methods requires new approaches in data visualisation and visual analytics.

You can send me an email, or find me on Twitter, LinkedIn, Google Scholar or Research Portal of the University of St Andrews.